The Flight 93 or Pennsylvania Crash Site wreath is now on display at the National Liberty Museum in the heart of historic Philadelphia. The Museum was established to celebrate our nation’s heritage of freedom and the wonderful diverse society it has produced, using glass to represent the fragility of freedom. 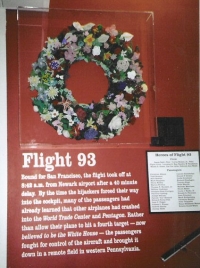 The New York wreath was the last to find its permanent home, thanks mainly to the tireless efforts of Betty Listello, New Yorker and Beaded Flower Group member whose dream had always been for this wreath to be displayed at or near Ground Zero. Her patience, persistence and determination to reach this goal was fulfilled when the wreath was accepted by the World Trade Center Foundation to be included in the permanent World Trade Center Memorial now under construction. In September 2006 the wreath was moved from the Wheaton Village Glass Museum in New Jersey where it had been on display and transported to the World Trade Center Foundation, 1 Liberty Plaza, New York City, New York. The wreath has now been mounted in a glass display case and is now on display in one of the Foundation ‘s board rooms. While the rooms are not generally open to the general public, it may be possible for anyone wanting to see the wreath to make arrangements in advance by contacting the Foundation. It will eventually be on public display. More information on the Memorial Site and the Foundation can be found at their web site.

This website uses cookies to improve your experience while you navigate through the website. Out of these, the cookies that are categorized as necessary are stored on your browser as they are essential for the working of basic functionalities of the website. We also use third-party cookies that help us analyze and understand how you use this website. These cookies will be stored in your browser only with your consent. You also have the option to opt-out of these cookies. But opting out of some of these cookies may affect your browsing experience.
Necessary Always Enabled
Necessary cookies are absolutely essential for the website to function properly. This category only includes cookies that ensures basic functionalities and security features of the website. These cookies do not store any personal information.
Non-necessary
Any cookies that may not be particularly necessary for the website to function and is used specifically to collect user personal data via analytics, ads, other embedded contents are termed as non-necessary cookies. It is mandatory to procure user consent prior to running these cookies on your website.
SAVE & ACCEPT