I’m Rosemary Kurtz, and I have been a bead-flower artist since the late 1960’s.

My Development as a Beader 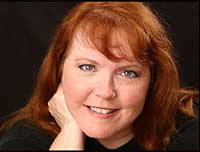 I have an older sister and a younger brother. At that time, we all wanted to get jobs and make our own money. Not only were we too young, but since we were at the tail end of the “baby boom,” all the older kids already had all the jobs in our area. So, Mom looked into a lot of the arts and crafts that were popular at the time: macramé, papier-tôle, bead flowers, stained glass, crochet, etc. She bought some books and taught herself the basics of all these crafts (she was already accomplished at several needle arts). She then showed us her handiwork, and told us all to pick one or two crafts we’d like to learn.

Mom taught us each what she had just learned about our “chosen art forms.” We learned and practiced, and started making up some inventory. When the warm weather came, we entered art and craft shows around Long Island under the name of “Kurtz Family Crafts.” Mom had us each contribute some of our sales money into a central fund, which was used for entry fees and supplies. This is how the three of us made our spending money until we all were in college. It was great family time, and it sparked the creativity in all of us. 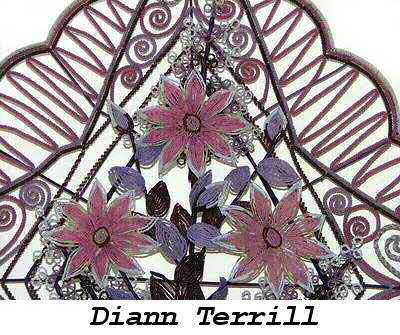 There are many Internet groups on all kinds of crafts, and bead flowers are no exception. I am a member of two groups, one of which has more than 1,300 members worldwide. In response to the 9/11 disaster, one of our members suggested that, since one of the original uses for bead flowers was in funeral wreaths, it would be appropriate for our group to make memorial bead-flower wreaths for each of the crash sites. She suggested this to the group, and there was an overwhelming response.

Among those responses were several from new beaders. These new members had just heard of bead flower making and had joined the group, but didn’t yet know any of the techniques. They were afraid they wouldn’t be able to participate in the wreath project.  One of them asked if there were any instructional videotapes available to help beginners. So, the following weekend, I made a tape outlining the basic techniques, so that even the newest flower beader could contribute at least a small flower and a few green leaves to the project. I have since made a more detailed set of DVDs that bring the student through materials to assembly to potting through advanced French techniques. 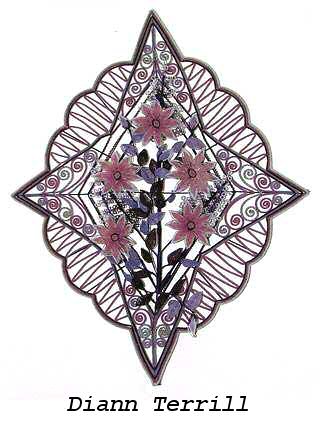 In order to centralize the work for each of the wreaths, volunteers from the group came forward to handle the actual receiving and assembly of flowers and leaves for each wreath. These volunteers generously gave of their time and resources to obtain wooden forms and materials, and in one case, a beautiful brass stand to hold the finished product. Hundreds of handmade, long-stemmed flowers and leaves were made and sent in from group members around the world, and were assembled into the breathtaking wreaths. These wreaths are now in the Pentagon, the Liberty Museum in Philadelphia, and the third was temporarily placed in the Wheaton Museum of American Glass in Morganville, New Jersey. This wreath has now been accepted for display in a future memorial near Ground Zero and has been moved to New York for holding until the memorial is erected. For security reasons, the Pentagon wreath is not available for public viewing, but it may be possible to get an appointment to view the wreath and other 9/11 memorabilia. All these memorabilia are in a large, glass wall-mounted case in a new hallway in the Pentagon. This hallway leads to a chapel commemorating those who died on 9/11. Pictures of these wreaths and a professionally-written brochure about the project are available on my website at www.rosemarykurtz.com. 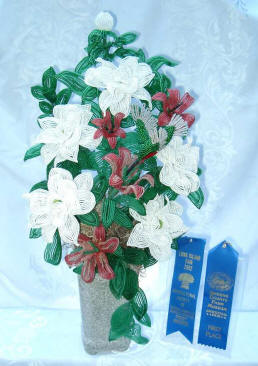 Several years ago, when the Swarovski Crystal company was first making their line of crystal beads, they commissioned me and my beading friends to design and create the first Swarovski crystal bead flowers. The purpose was to showcase their beads.

Since bead flowers are made with very tiny beads, the Swarovski company supplied each of the artists with packages of their smallest beads, which are 3mm and 4mm beads. Each package held ten gross of the beads, or 1,440 total. The artists had no say in what color or size of beads we would get; we just had to work with whatever we got. The beads came from Austria wrapped European-style: not in a plastic bag with a label stuck on, but in a neatly folded square of glossy printed and waxed paper. The packaging alone was so elegant. When I opened my first package, the beads looked like a handful of gems. Since these beads are considerably larger than our regular seed beads, the challenge was to adapt or write new patterns, without having the resulting flowers look “chunky.” As we developed the flowers, most of us found that the medium to large flowers would take up to 2,000 beads; for example, my large orchid takes 1,950 beads without any greenery. After a little breaking-in period with the new larger beads, we produced a group of flowers that delighted us and the Swarovski company as well.

This collection of flowers toured the world, and is now back at the main offices of the Swarovski Company. It was a very exciting project, and we felt privileged to be a part of it. Many of the patterns from that original project have now been collected into their own book by Dalene Kelly, which is available from Amazon. 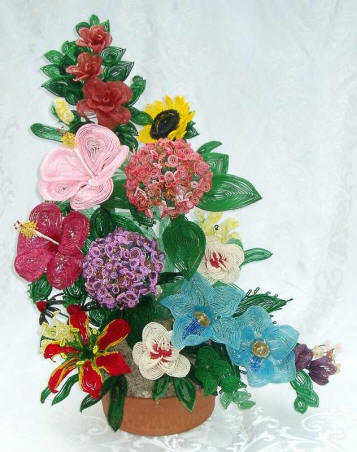 I currently hold fifteen blue ribbons for local, national and international competitions, including the Cincinnati Flower Show. Some of my work appears in 2004’s edition of “500 Beaded Objects” from Lark Books.

I have exhibited my work in libraries and art shows around Long Island. One of my large pieces was selected to be in the World Book of Beads VII show in November 2004 at the Museum of Arts and Design in Manhattan. (left).

The BeadBugle is pleased to announce that Rosemary Kurtz will become a regular contributor to BeadBugle.Com and you will see her first article in the November’s first issue.

(Editor: Several of Rosemary’s earlier pieces were listed under her previous name of Rosemary Topol)

This website uses cookies to improve your experience while you navigate through the website. Out of these, the cookies that are categorized as necessary are stored on your browser as they are essential for the working of basic functionalities of the website. We also use third-party cookies that help us analyze and understand how you use this website. These cookies will be stored in your browser only with your consent. You also have the option to opt-out of these cookies. But opting out of some of these cookies may affect your browsing experience.
Necessary Always Enabled

Any cookies that may not be particularly necessary for the website to function and is used specifically to collect user personal data via analytics, ads, other embedded contents are termed as non-necessary cookies. It is mandatory to procure user consent prior to running these cookies on your website.